This year we have collaborated with Pares Sueltos, a project which promotes diverse theatre art. Thanks to this collaboration,  Liant la Troca will feature in our festival.

Liant la Troca is a Collective of Integrated Dance which was formed in 2011 after workshops run by Jordi Cortés and lead by Patricia Carmona in Roca Umbert´s space la Troca in the town of Granollers.

The group is composed of people with different disabilities; both artistically and physically speaking. For this reason, without even knowing, the audience will become aware of such concepts as Ability, Integration, Accessibility and Inclusion, whilst clearing their minds of such concepts as Disability, Rejection, Inaccessibility, Segregation… 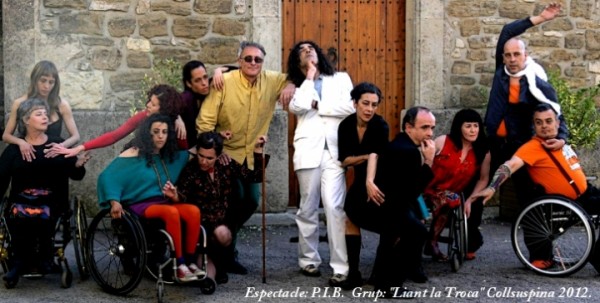 The different members of the group all come from different areas but they all share the necessity to express themselves through art and movement, regardless of their disability. Furthermore, as a result of this collaboration, a group of members from Pares Sueltos carried out their own version of the choreography Rosas Danst Rosas of Anna Teresa de Kaersmaeker, for the project of #HazteunRosas for Trayectos 2014.

This will feature in a video resume of all the different versions that have been received. This final montage will be projected in Etopía Centre of Art and Technology on the first day of the festival and it will also be on our Youtube channel.

This website uses cookies to improve your experience while you navigate through the website. Out of these, the cookies that are categorized as necessary are stored on your browser as they are essential for the working of basic functionalities of the website. We also use third-party cookies that help us analyze and understand how you use this website. These cookies will be stored in your browser only with your consent. You also have the option to opt-out of these cookies. But opting out of some of these cookies may affect your browsing experience.
Necessary Always Enabled
Necessary cookies are absolutely essential for the website to function properly. This category only includes cookies that ensures basic functionalities and security features of the website. These cookies do not store any personal information.
Non-necessary
Any cookies that may not be particularly necessary for the website to function and is used specifically to collect user personal data via analytics, ads, other embedded contents are termed as non-necessary cookies. It is mandatory to procure user consent prior to running these cookies on your website.
SAVE & ACCEPT